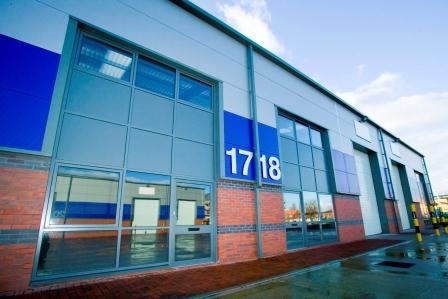 After completing two lettings in the first two weeks of November, Hurstwood’s mixed use scheme at Leigh Business Park is now fully let.

The final two lettings at the office buildings on the site, Emerald House and Amethyst House, were completed earlier in the year. Now, following the lettings to DNG Commercial Refinishing Ltd and Mclaren Sports Homes, the industrial units are fully occupied as well.

Hurstwood Chairman Andy Park said: “The letting of the final two industrial units at Leigh Business Park is fantastic news for Hurstwood. Following the letting of the two office buildings earlier in the year we are now fully occupied at all of our property on the estate.

“The business park has proved to be one of our most popular locations in 2012 thanks to its prominent location on the East Lancs Road and the variety of modern office and industrial space available. We are pleased to have welcomed so many businesses to Leigh.”

Other companies to agree deals on industrial units in 2012 include Commando Joe’s Fun and Fitness and Renewable Solutions Team. At the two office buildings, Omnica and Snom UK have both moved in this year.
In total, six new lettings have been completed on the site in 2012, with a combined size of more than 20,000 sqft.

Leigh Business Park is a development of 13 modern industrial units and two large office buildings built by Hurstwood in 2006.

It is located just off the A580 East Lancashire road which links Manchester and Liverpool.

To find out more about Leigh Business Park, and all of Hurstwood’s commercial property in Greater Manchester, click here.