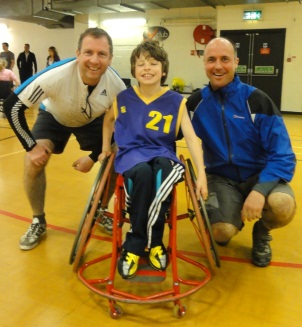 Hurstwood Chairman Stephen Ashworth and MD Andy Park were part of a team which set out on a bike ride to raise funds for the Manchester Mavericks Wheelchair Basketball Team. Andy’s nephew Jake Stanway is a member of the club and his father, Tom was also in the bicycle riding team.

The 65 mile route saw them begin at Whitebirk, Blackburn, along the Leeds Liverpool Canal through Chorley, Leigh, Tyldesley and Eccles, finally following the Manchester Ship Canal to their destination, Manchester City Centre, home of the Manchester Mavericks.

As if the journey was not challenging enough, the weather was not favourable but this did nothing to dampen their enthusiasm and they completed their challenge, several punctures later. Stephen and Andy then played in an All Stars Basketball match and were well beaten by the Mavericks team.

The cyclists have a goal of £5,000 in charity donations, funds which will be well used for transport nationwide, fees, sports kits etc for the Mavericks who currently stand 5th in Division One of The British Wheelchair Basketball League.

Clearly the Manchester Mavericks is a very deserving cause and they are in desperate need of funds to enable the club to continue and flourish. The Team that cycled the arduous 65 mile course deserve some recognition for their efforts and therefore would be very grateful for any donations, big or small to the Mavericks.

A Just Giving webpage has been set up to receive donations: www.justgiving.com/tom-stanway

Thanks to those who have already donated and thank you in advance for forthcoming donations.