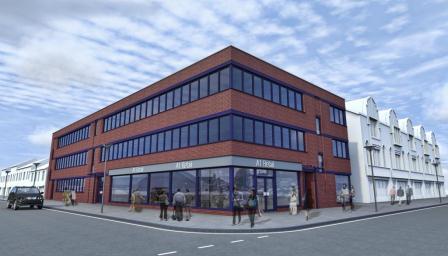 The 5,800 sqft second floor of the building is to be split into smaller suites from 1,000 sqft.

This follows the recent news that planning permission is being sought to allow nightclub use on the building’s ground floor.

Crystal Director Andy Park said: “As part of Crystal’s continuing investment in Worksop, we have decided to convert the second floor of Crown House into a business centre. Currently there is a high demand for smaller offices and we feel that, given the shortage of quality office space in the town, these new suites will prove extremely popular with local companies and bring more jobs to the town centre.”

Crown House, originally the site of the town’s cinema, was most recently used for government offices and has undergone a major refurbishment since being acquired by Crystal in 2010.

The building comprises more than 17,000 sqft of retail and office space and is located on the corner of Newcastle Avenue and Hardy Street, adjacent to the town’s bus station.

More information on Crown House, and other commercial properties from Crystal and Hurstwood, is available here.