Northwich Business Centre has been a major success story for Crystal in 2013. The building opened its doors in February and since then there has been a steady stream of new clients.

The property was originally built to house the town’s job centre but, following the closure of a number of Jobcentre Plus branches, the building became vacant in the late 1990s. It remained unoccupied until it was bought by Crystal in 2012.

It was decided initially to make the second floor offices available to let. Following some redecoration work to bring the offices up to standard, we began marketing the office space and we were immediately surprised by the level of demand. The first tenants were signed up before the offices were ready and moved in when the business centre opened in February this year.

With nine deals agreed within the first couple of months, we had the confidence to make more improvements to the building, including the creation of a break out room with free Wi-Fi for tenants.

With the second floor close to full-occupation after only a couple of months, the decision was taken to convert the first floor to more business centre offices. More offices were also made available on the ground floor. 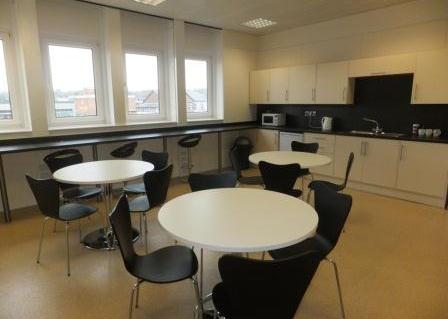 As of October, more than three-quarters of the suites have been let (27 out of 34). Summer has been particularly positive at the building, with the normally quiet holiday period seeing a large number of new clients take occupation. The level of enquiries also remains high. The building is now one of our flagship properties so what’s the reason for this success?

We’ve written before about the demand we’ve been seeing over the last few months for smaller offices and we’ve seen it again in Northwich. New and small businesses are looking for office suites but don’t want to commit to long-term lettings on space they don’t yet need. Business centre suites provide space to suit their current needs, plus the potential for expansion in the future.

Northwich itself didn’t previously cater to these requirements. The development at Gadbrook Park offers much larger offices, on longer, more traditional, lease terms. Northwich Business Centre has filled a gap in the market and that, along with the great community atmosphere we’re seeing there, should see us continue to let offices on a regular basis.

For more information on Northwich Business Centre, and to check current availability, visit the property page.