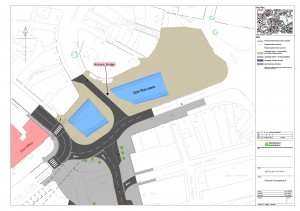 At the end of last year, plans to re-open the River Roche in Rochdale were revealed.

The Heritage Lottery Fund is boosting a huge £1.2 million into the scheme, which is a vital part of Rochdale town centre’s ongoing regeneration.

The project is also being backed by the Environment Agency and Regional Floor and Coastal Committee, who together will remove two sections of the culvert that covers the river, to reveal the medieval bridge that has been hidden from public view for more than a century.

Work is set to commence this March, with the entire scheme due to be completed in the autumn.

Sales negotiator Laura Wilbourn at Hurstwood comments, “It is brilliant news that the plans to re-open the river have gained real momentum over the last few months. Honouring English heritage is so important, and this will be a unique part of Rochdale’s heritage.

Hurstwood’s No.2 The Esplanade, a Grade 2 listed office building in Rochdale town centre, will overlook one of these exposed bridges and the look of the Esplanade and surrounding areas will be transformed by these works”.